skip to main | skip to sidebar

“The next sentence is slightly obscure...”
Along she goes in the text, dog-wise led by subject/verb/object, hauled along sentence, sentence, sentence, then here comes
this big bump by Agrippa: “For [imagination] does, of its own accord, according to the diversity of the passions, first of all
change the physical body with a sensible transmutation by changing accidents of the body, and by moving the spirit upward
or downward or outward...” Here she dangles, just hangs there.
The loose ends swirl around her and her nose comes out of the book like a chipmunk. There’s a weary confusion that
makes the world warble at her for a while...
“the physical body” “accidents”
“according to the passions” “inward
outward and downward” “diversity” “of its own accord”
“sensible transmutation”
“by moving the spirit”
“of the body”
. . . until the tangle begins to unwind, and then,
(“the imagination”)
like railroad cars
(“does...change”)
on newly laid track
(“the body”)
she picks up speed
(“and moves”)
and then her eyes draw her
(“the spirit”)
along.
She thinks: Reading is like fucking used to be; you can do it, you can even talk about it, but you have to pretend you don’t
notice the bumps and hitches, the slow spots, the moment in bed, when, on the upstroke, the mind wanders for no reason at
all, and you think of death camps.
as if the world were a boot
slapped on the table, not word space word,
alphabetness and all the scraggy pieces of text
cockroaches pretending to be a scarecrow:
saying shiny and horse stall and pitchfork,
sticking something into a cake, wheat or oat straw?
saying childhood on the farm, saying:
think afraid, Dorothy, crows, Halloween, hay mow
think fall, wind, flannel, garden hay hook, horseshit, pitchfork...
think...
no crows will eat the corn on this page.

“On one occasion she received from me a letter containing the identical longish sentence she had written herself.”
In the mailbox, she sees the handwriting of someone she loves who is far away; it is not memory, though, that makes her
womb know, makes the snow on the mailbox melt, snow flakes in the air incinerate like little novas, the heat spreading up
the siding of the house and through the window as if the letter were a 4000,000 BTU boiler, big enough to heat a large
school, the heat spreading right through her Levi’s and body fat into her belly. It is not a memory of his hand, but the sign
of what her grandmother called his “hand”.
“She reads:
“As the woman boarded the train, she dropped one of her gloves, but she did not notice it was missing until she was
seated and the train had begun to move, when, looking out her window, she saw the lone glove lying on the platform; I
watched her dismay reflecting back to her in the mirror made by the window glass, the train beginning to move with its
gathering wshoo, wshoo, wshoo, until—the train almost pas the platform, she threw the window open and tossed the
remaining glove out of it, onto the platform, next to its previously abandoned mate.”
Had she only read this sentence the previous day, in some book she could not remember, or was it the exact same sentence
she had written herself?
The shock of it, seeing this sentence written back:
It is
not like ‘it is February, my heart
is frozen. I miss you.’

“The disposition to accept strange events seems to make them happen...”
She looks more closely at the sentence.
All the vowels on the page become little eyes
looking back at her, the i’s the closed eyes
of sidewise sleepers, the o’s Jimmy Colona
eyes looking big as if something had scared them too much
to blink; the a’s making their own arching eyebrows,
all those eyes scanning her hands and arms,
trying to get a good look at her face.
She presses the page to her face,
and opens her mouth to it,
opening and closing her eyes
so her eyelashes brush the sentences.
and breathing little ahhhs, she invites them
to look right in.

“...looking sidewise at disorganized facts to make perfect sense of them.”
She reads: “A tangent cuts across the circle, the knife
splits, crosswise, the pear; the dying wife
waves a hand toward her husband, hoping to wipe years away
and see the one she first loved.”
The margins
wiggle and
shift
trying to
justify themselves.
From the slice of tissue
nipped from a cervix and seen sidewise,
her whole life can read: blood type
and ancestry, the number of times
she’s made love, rank and phylum, the size
of her ovaries, drugs taken,
chemicals absorbed; in the purple stain
everything might be known, most of which
she never knew herself.
As she drowses, the lump in her comforter
becomes an alp
and suddenly she sees not her husband’s eyelash
but Heidi calling to Peter
and the goats, then someone wearing a garter belt
in the back of taxi, as if any man’s body
could ever excite her as much
as a perfect sentence,
a whole world opening to her
that was forgotten before.
From the edge, a piece of paper
almost does not exist; she crumples it and wads it,
then smooth it out and squints. In the hills
and the valleys of this paper
there are roads that make her
text:
motto of the dancing vulva: say something sweet, sweet, sweet
or I won’t let you in.

“...they gradually fell away...”
Even if she can not make out anymore
what the words say, they seem to cohere,
but then, as she looks
closer, she can see the text
like any object watched closely enough,
squiggle and move, take a foreground,
a background. She can see the letters moving
on the page, clustering together on the left,
then moving to the right in little eddies.
The D’s and P’s jostling one another
bumping bellies and breasts,
the F’s are silent as judges,
and all around the page, the Oooos
and Eeees moaning
how this couldn’t be happening
to them.
The text wavers along the margins
and then the letters keep shoving
one another like flies on a body
or lemmings toward a cliff until the ends of the sentences
stumble over their periods, making black clusters
where the letters trip and pile up
on top of one another. She thinks
this is inside herself, another deterioration
of vision like that one which made her hold
the book further from her face, until
where the page number should be, a gang
of words humps together, then sharpens
into a spike which stands up,
asking her to impale herself
on the page.

“...the magician personally copying the manuscript offers the important clue.”
To become the other, she copies out his hand,
the flamboyant swirl of the y
intruding into the line below
the hasty ahead-of-itself cross
over the t, the slight fallback
at the top, where instead of coming straight down
the hand makes a retrograde turn
and the top of the t is a loop. This
is putting herself in some else’s hand,
and missing you, I sit here tracing
and feel what it is to be you—the lines
sloping up at the end and crowding
their margins, as if they want to keep going
much further and higher than this particular page.

HER BECOMING HIM BECOMING IT BECOME HER

“He pinned her to the ground.”
Marks on the palms of her hand
like hieroglyphs, nails making the dots
of eyes: this paper is the crazy lover
subdued for the moment, these scratches
the ropes and stakes that bind
his contorting muscles, the arch
of his back as he torques up, toward . . . away
and is gone . . .under the thicket of cross hatchings,
knee height to trip the reader, a kind of labyrinth,
from which someone might never emerge, a hidden place
under the cross of a t, and then
the lone silence across all the page
heading a paragraph flips her
up to dry land.
Beached again.

“...feels impelled to warn the reader.”
When you count up all these words,
think of the space left in the text,
and scuba dive the reef of ff’s and cc’s.
Undulate along the breasts of the sss’s,
your back curving to make a space for her breasts, a
nd cozy in like sleeping lovers.
Dive the eee’s and both hands, swing yourself
small in the pupil of her eyes;
mount the X and perch there in the cross piece,
staring into the valley of w and twin beacons
of M. Monkey around up there and perch
on flagpole t. Slid the comma and befuddle yourself
in funhouse virgule, step the path made
by the ellipsis and follow to the end of the sentence
where old familiar period makes a promontory
you can climb. From here you can see OOOOO,
your tunnel home, and on all sides,
as far as you can see, the hope
and desolation of the margins.


Posted by Fluffy Singler at 12:12 AM No comments:

All Aboard the Karawane!

Karawane began in 1997 as Voices From the Well to document the open mic poetry scene in Minneapolis. In the subsequent years, we have expanded to include experimental performance texts from artists from around the world, including poetry (which is inherently a performance genre, we believe), performance art texts, scripts, instruction pieces, stories, manifestos, etc. We require that the work be experimental in some form and that it be performed somewhere, intended for performance, or about performance.

Our blog features excerpts from past, present and upcoming issues.

We also have a Facebook Page and a website where you will find submission guidelines, copies of the journal, and general news.

You can donate to Karawane through our Paypal account by indicating karawane@earthlink.net.

We hope you'll read the work featured here and let us know what you think. 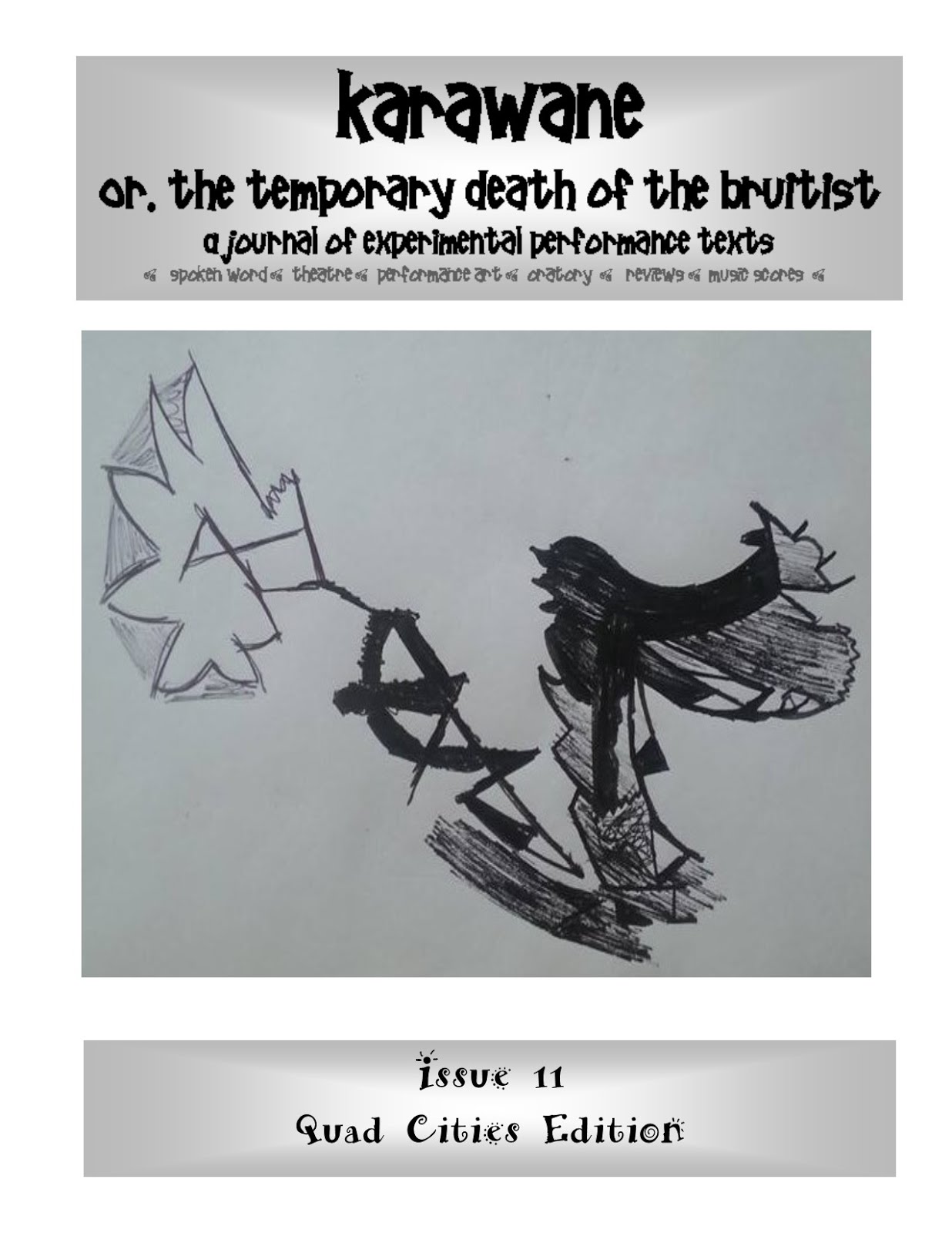 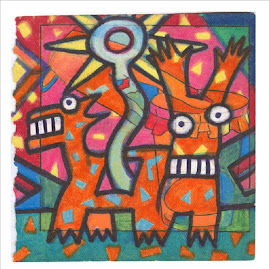 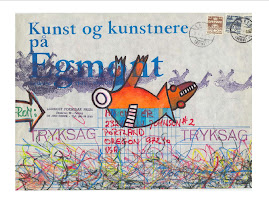 From "I'm No Beauty" Shawn Womack 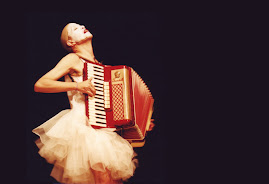 Wilson Loria in To the Winners 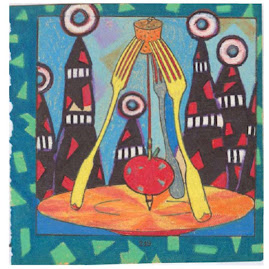 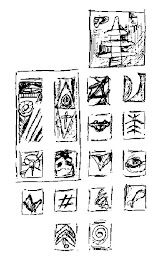